A mini-abdominoplasty is similar to a standard abdominoplasty with a few differences. Like the latter, the mini-abdominoplasty uses a waist crease incision but often (but not always depending upon the amount of skin to be removed) the incision is not quite as long as with the standard procedure. A shorter incision does not mean you will heal faster or have a shorter recovery, the difference in incision length is not enough to make such a difference. Wounds heal side to side, not end to end, so a shorter incision heals in the same time as a longer incision. There are some other substantial differences. There is no incision made around the umbilicus, and it is for this reason that when the skin is lifted up off the abdominal wall, it is only to the level of the umbilicus. As only the lower abdominal wall is exposed, only the lower abdominal muscles can be tightened.

The Steps In Performing A Mini-Abdominoplasty

The blue ellipse indicates the proposed amount of skin to be removed. The lower solid blue line is where the initial incision is made. The dotted blue line is the proposed upper portion of the skin excision (removal). This can vary upwards or downwards depending upon how much skin excess exists. In this procedure, there is no incision made around the umbilicus. The umbilicus remains attached to the underlying abdominal muscles as well as to the remaining abdominal skin. There will not be a circular hole in the skin flap. The yellow area shows the extent to which the abdominal skin is elevated off the abdominal wall. 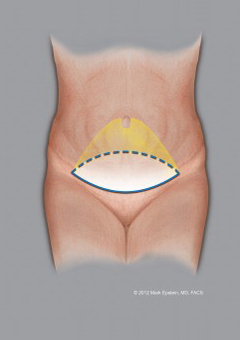 The abdominal wall musculature is tightened using a special running suture. The muscles are brought together in the midline.

The completed repair of the abdominal musculature is shown.

The excess skin is elevated above the abdominal wall and pulled downward. The area of resection (removal) is indicated with a dotted line. There is no hole in the abdominal skin flap because there was no incision made around the umbilicus.

The final result is shown with the location of the scar across the waist crease of the abdomen. There is no scar around the umbilicus.

COMBINE TUMMY TUCK + LIPOSUCTION
Combine these two procedures to get the best results with contouring your entire trunk. Learn about 4D-VASER LIPO-ABDOMINOPLASTY (VASER liposuction simultaneously coupled with an abdominoplasty).

Read our reviews on Google here.

Read our reviews on RealSelf here.

Read our reviews on RateMDs here.

Read our reviews on Vitals here.

Latest
From Our Blog

Are You at Risk for BIA-ALCL?

As a Board-Certified Plastic Surgeon who specializes in breast surgery, I am adamant about keeping my patients up to date on the latest information regarding their breast implants. Over the last several years, there has been a lot media attention on BIA-ALCL or Breast Implant Associated Anaplastic Large Cell Lymphoma (BIA-ALCL). This is a rare ...read more
READY TO GET STARTED?